What is the most comforting smell in the world?

Have you ever wondered why picking up your baby when they’re crying can calm them down almost immediately? Babies need to have their caregivers close because they are signals of safety. Newborns have inbuilt mechanisms that help them rely on their social environment. For example, even very early on, they show a strong preference for their mother’s voice and odor. We’ve known for a long time, through research and anecdotes from caregivers, that crying infants can be soothed when they’re picked up and held close. One possible explanation is that maternal odor has a soothing effect. Maternal odor can be a powerful signal, telling the baby, “You’re okay. You’re safe!”

Some past research has shown just how powerful maternal odor can be. One study by Nishitani and colleagues that showed that maternal odor even reduced their infant’s pain response during medical procedures. A different study found that infants look at faces for a longer amount of time in the presence of maternal odor. Have you ever noticed that your baby seems to stare at faces longer than any other shape or pattern? The ability to process faces is incredibly important (especially for infants) as it can provide social information about the person’s identity and emotion. 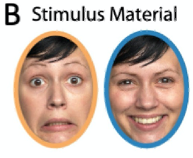 Sarah Jessen, a neuroscience researcher, designed an experiment to see how babies would respond to happy and fearful faces differently depending on what smells they were exposed to. Did you know that by the time babies are seven months old, they can process different emotional facial expressions?

To do this, Jessen used 3 types of smells

The infants were randomly assigned to either the maternal odor group or one of the control measures (unfamiliar odor or no odor). They randomized the participants to different groups so they could accurately understand if the odor caused the infant’s response. If they didn’t randomly assign the participants, and instead chose to assign all the female infants to the maternal odor group and all the males to the unfamiliar odor group, it would be hard to tell if the infant’s response was due to their sex or the odor they were smelling!

She got a group of 50 moms to wear the same t-shirt 3 nights in a row (this may sound yucky, but it’s for science!). The moms were asked to use their normal shampoo, deodorant, soap etc. as usual, and to not introduce any new products during this time. This was to ensure the t-shirts really smelled like them.

Then, when mom and baby came into the lab, the babies put their EEG caps on to measure brain activity. An EEG can be used to get safe, noninvasive recordings of electrical activity in the brain. The recordings can help tell us about patterns of activity in the brain. When babies are sound asleep, for example, there is a recognizable pattern of electrical activity.

When the babies had their EEG caps on, the t-shirts were placed on their chests – close enough so that they could smell them! What was particularly interesting about this study was that infants were placed in a car seat, not on their mom’s lap. This is so Jessen could disentangle the effects of physical proximity to the mama compared to just smelling them.

What she found was pretty amazing. The graphs below show how the EEG patterns of the infants in each group differed. When the babies were exposed to the fearful faces and the shirt that smelled like mom, their brains showed less of a fear response! When the t-shirts used had no specific odor or the odor of an unfamiliar mom, the infants had a greater fear response. This doesn’t mean that these infants were in great distress when viewing the fearful face, but it does show that their brain was telling them that they should be a little more vigilant. The fear response is a very normal (and essential) part of figuring out what is safe and what could be a potential threat.

So, what does this tell us?

Jessen’s results show that the mother’s presence, even if it’s just the smell of her, is like a safety signal for infants. Our little ones rely completely on their social environment for survival. For babies especially, the world can be a little scary because they don’t understand a lot of it. Part of our job as caregivers is to help them decide what is safe and what isn’t.

So, here’s what we’re prescribing: Cuddle your little ones!